If you’re brave enough to venture into an airport this year, you’re in luck: Beam Suntory’s so-called world whisky, Beam Suntory Ao–which we first wrote about back in 2019–will now be available at travel retailers in 16 markets. Previously, it was only available in Japan.

This is a unique expression that blends whiskies from all five major whisk(e)y regions–Japan, Scotland, Ireland, Canada, and the US; it’s a product of Beam Suntory, whose huge portfolio includes distilleries in all those regions. According to Suntory’s website, the whiskies are from Ardmore and Glen Garioch in Scotland, Cooley Distillery in Ireland, Jim Beam in the US, Alberta Distillery in Canada, and Yamazaki and Hakushu distilleries in Japan. Ao, which means “blue” in Japanese, refers to the oceans between these five regions. 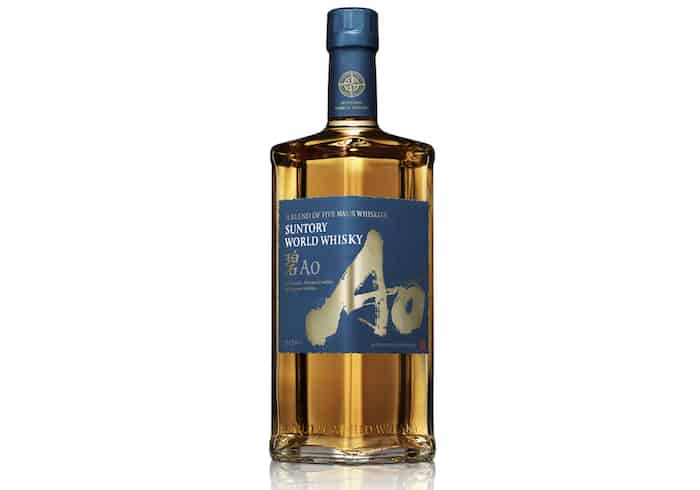 The whiskies were selected by Suntory’s fifth-generation chief blender, Shinji Fukuyo, who “selected each liquid based-on Suntory’s globally-recognized Monozukuri craftsmanship – a relentless pursuit of perfection, attention to detail and quality,” according to a prepared statement from the company. “Building on Suntory’s history of craftsmanship, this innovative, premium blended whisky embodies the spirit of Suntory and is a tribute to the liquid’s long history,” the statement continues.

“Ao is an exceptional whisky which, through the art of Suntory blending, allows you to enjoy the unique characteristics of all five major whisky-making regions,” said Fukuyo. The company’s brief tasting notes indicate “notes of vanilla, tropical fruit, and cinnamon.”

Japanese bartenders are well known for meticulously crafted highballs, and if you’re able to snag a bottle of Ao, you can try your hand with one of the five different highball recipes Suntory provides, each involving varying amounts of soda water and citrus peels and intended to bring out the characteristics of each style of whisky.

This whisky is retailing in travel markets at a somewhat higher price point than its initial 5000-yen Japanese release, at 65€ or $71 USD. Official tasting notes are as follows.