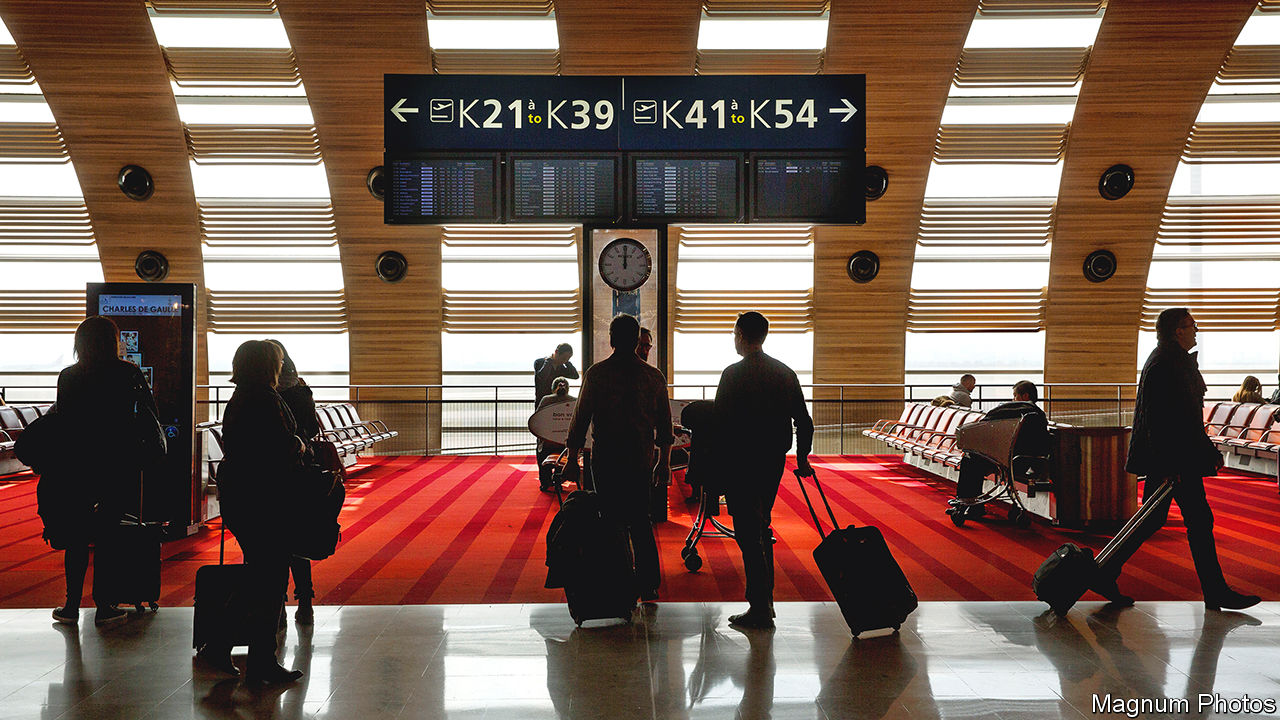 LUGGAGE UNPACKS how international travel has changed down the ages. Adventurers in the 15th-century age of discovery set sail in galleons loaded to the gunwales with supplies for voyages that might take years. Aristocrats on a “grand tour” in the 18th century trekked around Europe for months in horse-drawn carriages packed with trunks, servants and even furniture. The suitcase arrived at the end of the 19th century when spending several weeks abroad became more common for the wealthy. By the 1970s tourists and executives needed to cart the wherewithal for a few nights away through vast airports. And so the wheelie-bag came to symbolise the era of mass travel.

Enjoy more audio and podcasts on iOS or Android.

The rise of the wheelie-bag reflects the falling cost and increasing speed of long-distance travel. Cheaper air fares, rising incomes and more leisure time have made foreign trips routine and a holiday abroad accessible to many in the rich world wishing to escape their daily stress. Travel brings new experiences and memories (or moments to capture on Instagram). And if not every mind is broadened, surely few suffer the opposite effect. As Mark Twain put it, “Travel is fatal to prejudice, bigotry and narrow-mindedness.”

The ease of travel has not just expanded tourism. As companies have spread across the world so have their workers. Business travel keeps multinational companies and supply chains connected. And the ability to get away has let people spread around the world to work, learn or just have a change of scene. As families have dispersed so has the need to keep in touch or attend weddings and birthday parties in foreign parts. It has brought the world together by allowing family and friends to live farther apart.

Yet until recently few people went far. Travel was slow, difficult and expensive when it relied on wind or horsepower. Steam and railways opened the gates a little wider. But getting far afield even 100 years ago took an ocean liner or airship, a pricey way to go. A first-class cabin on the Titanic in 1912 started at £30 ($3,500 today); a transatlantic ticket on the Hindenburg cost $400 in 1936 (both one-way, as it later turned out). The big surge in international travel came with flying. A train on the trans-Siberian route from Beijing to Moscow takes over five days; a flight around seven hours. Yet the real game-changer was cheaper fares. In 1950 only 25m people took a trip abroad, says the United Nations World Tourism Organisation (UNWTO). By 2019 the number of trips had grown to 1.5bn (and that excludes migrants, refugees and visits of over a year).

Nearly three-fifths of international travellers arrived and departed by plane in 2019, compared with only 5% by sea and 1% by train, according to UNWTO. The 35% of travellers crossing borders in a car were mostly Europeans, inhabitants of the world’s largest travel market, taking advantage of their continent’s small size and good roads. Going on holiday is the main motive for travel abroad, accounting for 55% of trips. Business travel made up 11% of the total. Most of the rest was to visit families and friends abroad. Some travel for religious reasons (2m Muslims visit Mecca every year); and around 15m sought medical treatment in 2017.

International travellers have filled tills for hotels, restaurants, car-hire firms and tour operators. Their spending hit $1.5trn in 2019. Before covid-19, travel contributed 4.4% of GDP and 6.9% of employment in the OECD rich-country club. International travel made up 6.5% of global exports in 2019, according to the World Trade Organisation. In all, travel and tourism accounts for over 330m jobs, one in ten of the world’s total, claims the World Travel and Tourism Council (WTTC).

Covid-19 has devastated an industry that relies on the freedom of people to move. International travel stopped almost completely between March and May 2020, as four-fifths of countries closed their borders. Forbidden or unable to get around, travellers have stayed put. International arrivals fell by 70-75% in 2020, estimates the UNWTO, with 1bn fewer travellers and $1.1bn less spending (see chart). That is ten times the shortfall in travel spending in 2009 after the financial crisis. And recovery looks far off, even with effective vaccines. The OECD predicts that tourism will be among the “last sectors of the economy to…recover lost demand”.

It is not all dark clouds, however. Greenhouse-gas emissions by commercial jets plunged in 2020, intensifying debate about how to curtail this pollution permanently. Destinations blighted by overtourism have had a break. And optimists reckon that in the long run the link between growing wealth and the urge to travel will remain unbroken. This report will argue that, for all its high short-term costs, the pandemic may accelerate trends that will eventually make travel both easier and less damaging. Today’s travel industry may have taken a battering—but the new one that emerges could be better than ever.■

The future of travel Return of the wanderer

The female travel community exchanging postcards to explore the world –...